TROUBLE: Keeping my ship flying is keeping my pockets empty

My ship the Athame looks old, but is full of surprises

I am a happy Geth colony

All Quarians receive intensive technical training as youths so they are able to do their part to maintain the fleet. This provides a +2 bonus to making repairs or modifications to technology.

Light armor offers a basic level of protection from enemy attacks and minimizes the movement penalties that affect weapon accuracy. It provides kinetic shields that must be Overcome with a difficulty of +4 before Stress or Consequences can be applied. Overload, Disruptor Ammo, and rapid firing weapons are best at bringing down shields and can be invoked to do so. To recharge shields take a full action and do not take any stress for an exchange.

Geth, Engineer. Once per scene gain a 2 extra stress boxes that can be marked instead of the character’s stress. Route energy into the shield matrix increasing its ability to absorb damage from attacks. 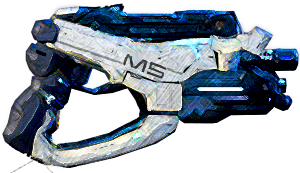 They provide a +1 to hit when using Focus and a +1 to Stress on a hit.

The M-5 Phalanx is the product of the Alliance’s Offensive Handgun Project, a close-in weapon to be used with no loss of stopping power in comparison with a soldier’s assault rifle. The Phalanx enjoys a ballistics advantage over most heavy pistols. Civilian variants are often purchased by colonists on planets that have particularly dangerous big-game animals.

Technique: Flexible (Focus Instead of Haste), Situational (Only when piloting a vehicle)

Use Focus instead of Haste for piloting.

MAGELLAN IS A BACKSEAT DRIVER (-1 Refresh):

Once per scene, with a fair(+2) focus roll, get a +3 bonus instead of a +2 when invoking aspects you created with Intellect. The Geth Magellan, living in Xantos’s armor, gives a lot of advice, often confusing, but every so often, insightful and relevant, and even on rare occasions brilliant.

Xantos and his younger twin Zorvos were born early during a combat jump as their ship was being attacked by pirates. The damage caused a breach of the septic birthing chamber, lethally infecting their mother, and requiring desperate medical measures to save the babies. Their father died defending the ship as a fighter pilot, and they were raised by their uncle, a fellow pilot named Dakmar.

Xantos took after his mother, and Zorvos took after his father, and due to history neither child knew, Dakmar strongly favored Zorvos. Xantos tried to please his uncle growing up, working hard to learn the technical skills that enabled life in the fleet, and trying to follow both his father and uncle’s footsteps as a pilot, but never pleased his uncle.

Xantos particularly raised Dakmar’s ire when he wandered off during a stopover at an ancient fuel depot on desolate moonlet with unusual mineral deposits. As he was separated, a number of geth ships entered the system in an apparent raid. Unseen by everyone but Xantos, there was a fight between several of the Geth ships, and one of them crashed into the planet. Xantos foolishly went out to the crash site looking for salvage, and found a badly damaged geth in the wreckage of the ship. About to run, he heard it ask for help, and approached. Somehow, he managed to patch together some of the remains of the robotic body with some of the emergency supplies of the ship, and stabilize it, but running low on air, he had to return to the base, and told no-one about the Geth, knowing his uncle’s fearsome fanaticism, and what it would mean for his odd robotic friend.

Undertaking the Pilgrimage, Xantos was given his mother’s old ship, the Athame, an ancient Asari transport. His first stop was the old moonlet from years ago, where he found the ruined geth ship, and discovered his geth friend was still there. Unable to repair the robotic body, he did salvage the drive core, and the geth transferred into the ship systems with it.

In order to avoid fuel off the station, he found a passenger, a Salarian named Morat Ledra who needed urgent passage to the Citadel. What Morat did not say was that he was being hunted, and it took some fancy flying to escape the fighters that chased after them. Impressed by Xantos’s flying and calm under fire, Morat paid for the repairs, started using Xantos for transporation in more dangerous parts of space, and eventually revealed himself as a Specter, and began training Xantos to better help him and his other agents, becoming a substitute father figure.

Morat died as Xantos was on a long term mission infuriating an inter-gang smuggling network. Xantos wants to avenge his mentor, and live up to his expectations by supporting his fellow agents.

I'm sorry, but we no longer support this web browser. Please upgrade your browser or install Chrome or Firefox to enjoy the full functionality of this site.